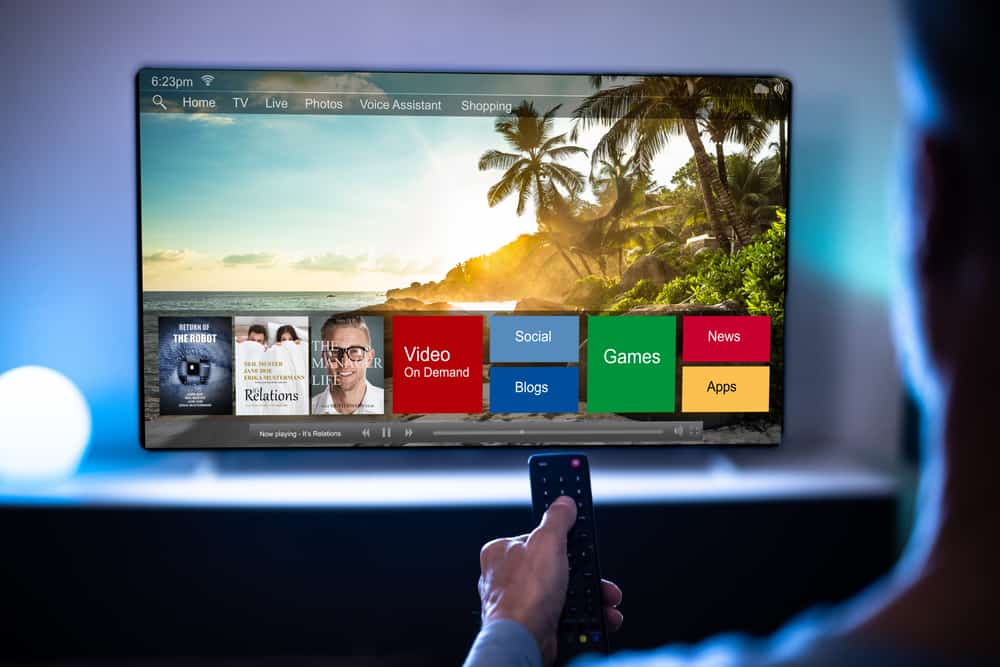 Smart TVs are all the rage these days, making up a significant part of every smart home setup.

If you’re in the market for a new TV, you’ll have difficulty finding a device that’s not smart.

However, you may also hear some other device options thrown around, making it challenging for you to find the best product.

One of these devices is an Android box, which can be one of your options when purchasing a smart TV.

Many users don’t know the difference between an Android box and a smart TV and wonder which one is a better option for them. 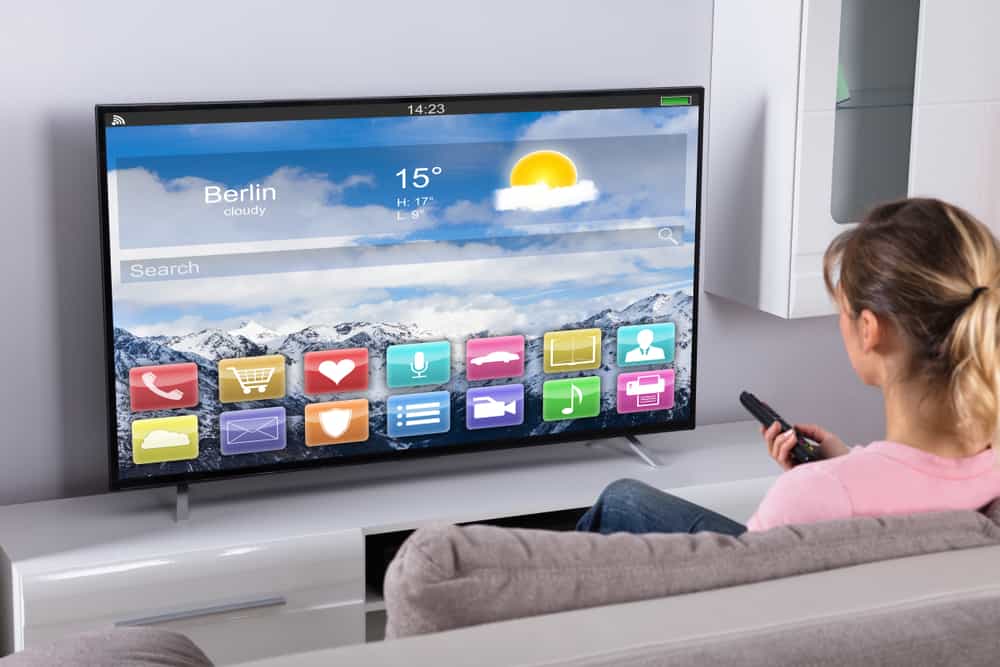 A smart TV and an Android box are different devices with similar functionalities.

What makes a smart TV different from a regular TV is its ability to connect to the Internet and access different apps.

It allows you to stream content by accessing streaming services built into its operating system.

On the other hand, an Android box is a small device, like a set-top box, that can make your regular TV smart.

It runs on the Android TV operating system and connects to your TV with an HDMI cable.

Instead of searching for channels on the TV, you’ll get streaming apps from which you can watch your favorite shows.

Depending on the streaming service, you may need to purchase a monthly subscription, or you may be able to get some content for free.

Android boxes come in many shapes and sizes because they are manufactured by different brands. 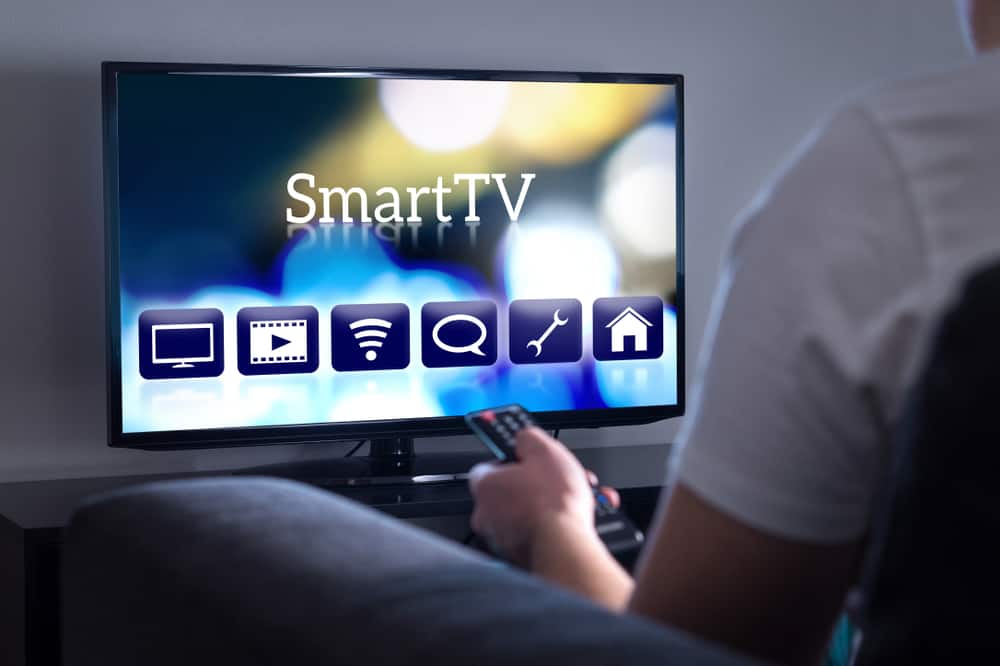 Any TV that can connect to the Internet is called a smart TV.

The best thing about smart TVs is that, although they connect to the Internet, they won’t stop working without a connection.

If you don’t have access to the Internet, you can use a smart TV as a regular TV by tuning in to cable TV channels.

However, with the host of features that a smart TV offers, there’s little point in using it as a traditional TV.

Here are the most exciting features that smart TVs offer.

As mentioned, smart TVs give you content from various sources.

These sources include streaming apps such as Netflix, Amazon Prime Video, Hulu, BBC iPlayer, Apple TV, and many more.

Depending on the smart TV brand and its operating system, you may have access to all or some of these streaming apps.

What’s more, the AI used in these smart devices allows you to get a tailored experience by suggesting the best content based on your previous views.

New models of smart TVs are becoming more like computers by integrating many smart features.

For example, they integrate built-in virtual assistants such as Google Assistant or Amazon Alexa, allowing you to take your TV-watching experience to the next level.

Some models allow you to connect your own voice assistant if you don’t like the built-in one.

So, you can use your Amazon Echo or Google Home to control your TV and other smart devices.

You can also use your smart TV as a larger version of your smartphone and download and install social media apps, stream music, and browse through their proprietary browsers.

The search feature can be even more convenient using the voice assistant to get the latest news about the weather, traffic, or financial news.

If you already have smart home components, you must have a smart TV as the central hub.

You can integrate the device into your smart home components and connect it to your lights, doorbell, cameras, and kitchen appliances.

You can control these devices, turn them on and off, and operate them through your smart TV.

If you don’t have a gaming console or a gaming PC, you can still play games on your smart TV.

However, you shouldn’t expect them to be AAA blockbusters that require massive computing power.

In contrast, you can play a light, casual game when you get tired of binge-watching your favorite Netflix show! 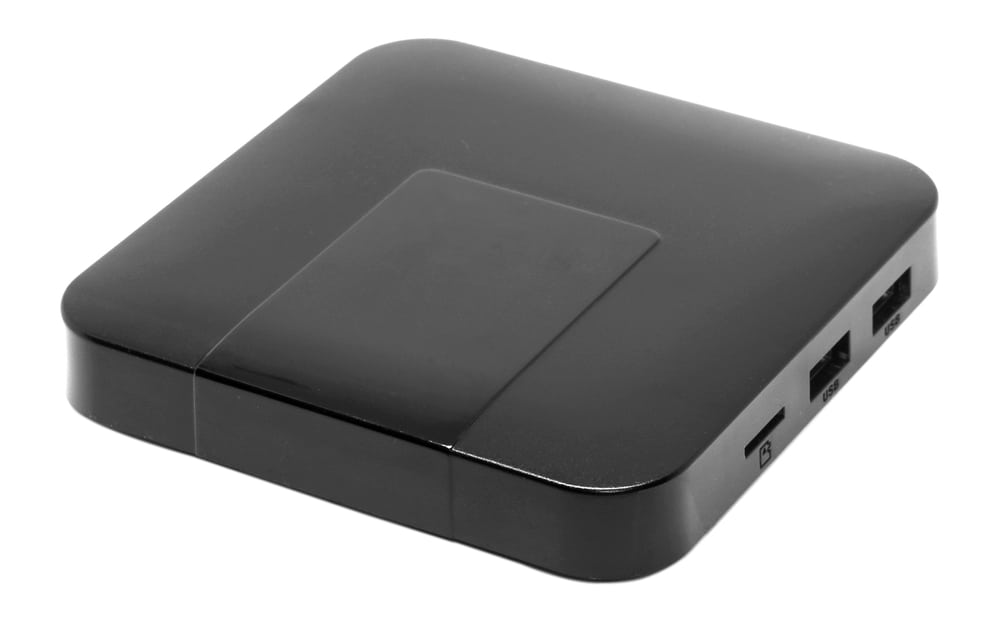 You don’t need a high-end smart TV to get the functionalities stated above.

Although most of the TVs manufactured in the past couple of years are smart with Internet connectivity, some people may still have older versions without smart capabilities.

If you want to bring your smartphone’s functionalities into your regular TV, an Android box is the way to go.

An Android box belongs to the wider category of set-top boxes or streaming devices that turn traditional TVs into smart sets.

Roku, Apple TV, and Amazon Fire are among the most famous streaming devices.

They have different hardware and software specs, but they all do the same thing: stream content.

While these devices may have several similarities and differences, the primary feature that sets them apart is their operating systems.

As you can imagine, an Android box runs on Google’s proprietary operating system, making it perfect for Android users.

The best thing about Android boxes is that you don’t need a particularly high-end TV to stream content, connect to your smart home devices, play games, or go on social media through your TV.

Any TV made in the past 20 years with HDMI connectivity can become smart using an Android box.

Advantages Of An Android Box 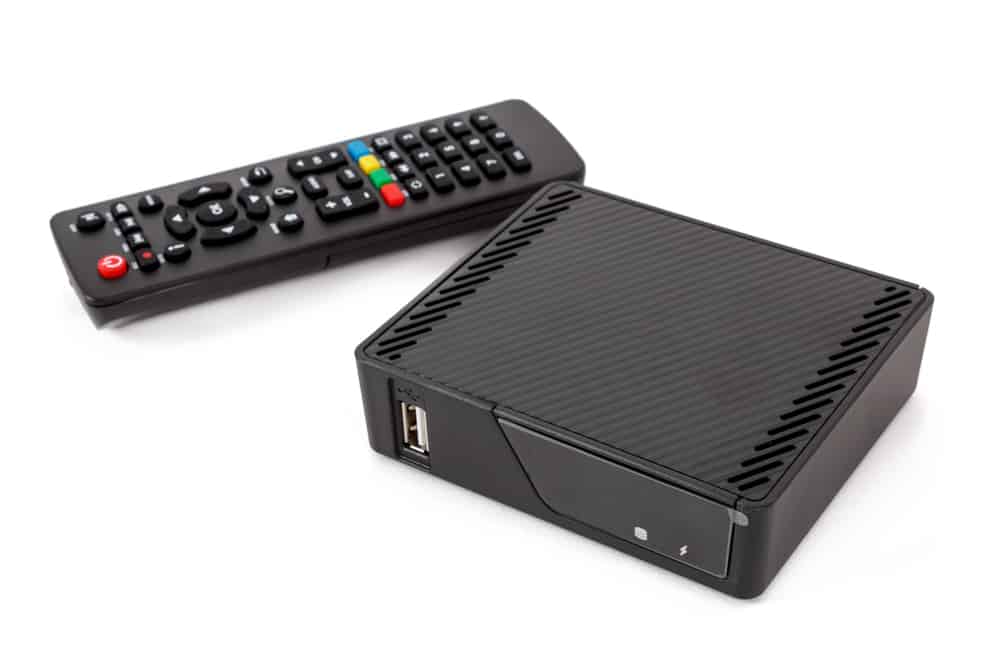 If you’re on the fence about getting a smart TV or going with your current TV and getting an Android box, you should consider each device’s pros and cons.

This way, you can make a more informed decision.

Here are the primary advantages of an Android box.

Although Android boxes are external devices that connect to your TV, they don’t have complicated setup processes.

You just need to plug in the box, connect it to the router wirelessly or through an Ethernet cable, and hook it up to your TV using an HDMI cable.

The device has a straightforward setup process that takes you step by step and allows you to customize the settings.

You only need to follow the on-screen prompts to add the features you want.

Perhaps the biggest reason that may make you lean toward an Android box is that you don’t need to break the bank to get one.

Although it sounds like a high-end device because it turns your TV into a smart TV, it doesn’t cost much.

And since there’s a wide range of streaming boxes running the Android OS, you can choose the most reasonably priced one that offers your favorite functionalities.

In addition, if you have a smart TV with older technology, you may miss out on the streaming opportunities that new devices offer.

In such cases, you can add an Android box to your current setup to access more content without purchasing a new smart TV.

Since Android is Google’s proprietary operating system, you can access many features offered by the same company.

The most notable feature is access to Google Play apps.

If you have an Android phone, you can use the same apps on both devices, getting a better experience on the bigger screen.

You can have the same experience with a smart TV, but only with a set that supports Android.

Advantages Of A Smart TV 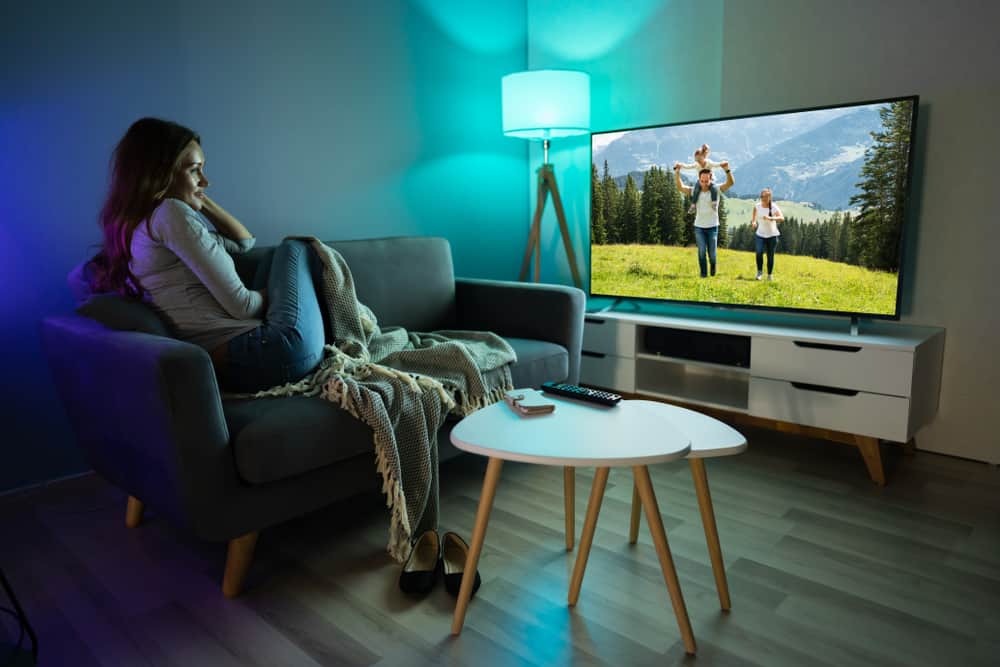 Despite their simplicity and lower prices, Android boxes aren’t always the best choice due to the perks offered by smart TVs.

Here are the most significant ones.

If you’re in the market for a new TV, there’s little chance of getting a regular TV as most modern TVs are smart and can connect to the Internet.

These TVs feature the latest technology and are less likely to become obsolete in the next few years.

They’re more likely to have advanced features like 4K video, support for higher generations of Wi-Fi, and more powerful hardware.

The only reason that may make you lean toward purchasing a regular TV and an Android box is the budget since you can get both at a lower price than a high-end smart TV.

However, the options are so varied that you can typically find a smart TV at a reasonable price without having to purchase two devices.

Smart TVs can feature a wide range of operating systems, while an Android TV box only comes with the Android OS.

As a result, if you’re an iPhone user, you may have difficulty syncing your smartphone to the Android box due to different operating systems.

For example, most modern smart TVs have a screen mirroring capability that allows you to wirelessly connect your phone to the TV and project its screen.

If you have an iPhone, you can’t connect it to an Android TV box because Apple has its own wireless technology—Airplay.

You may also want to listen to your iTunes collection on your smart TV, which is not possible on an Android TV.

In addition, getting used to the Android interface can be more challenging and takes more time for an iPhone user.

Other TVs have different operating systems that give you different capabilities and user interfaces.

Here are the most common operating systems used in smart TVs.

However, it’s different from Android TV in that it doesn’t allow you to download apps from Google Play.

In addition, you can only watch content from the Amazon Store and not from other streaming apps.

If you have limited space in your TV room, you may want to go for the smart TV.

Although Android boxes are small and easy to set up, they’re still one extra device that needs a wired connection.

This can add more clutter to your space, especially if you don’t have a TV stand and mount your TV on the wall.

How Long Do Headphones Last? (Explained)

Does Roku TV Have A Camera? (How To Find Out)

How Long Does A UPS Last? (Explained)

Why Are Rainbow Vacuums So Expensive? (Top 10 Reasons)

Why Are Arcade Machines So Expensive? (Top 10 Reasons)

Why Are 4K Blu-Ray Discs So Expensive? (Top 10 Reasons)

Why Are GoPros So Expensive? (Top 10 Reasons)

Why Is Bose So Expensive? (Top 10 Reasons)

Why Are Leica Cameras So Expensive? (Top 10 Reasons)

Why Are Solar Panels So Expensive? (Top 10 Reasons)

Why Are Graphing Calculators So Expensive? (Top 10 Reasons)

Why Is One Airpod Louder Than The Other? (Causes, Fixes)

Why Is The Apple Pencil So Expensive? (Top 10 Reasons)

Are Expensive HDMI Cables Worth It? (10 Reasons They Are)

Are Expensive Routers Worth It? (10 Reasons They Are)

Why Are Espresso Machines So Expensive? (Top 10 Reasons)

Why Are Samsung TVs So Expensive? (Top 10 Reasons)

No HDMI Signal From Your Device (Causes, Fixes)

Can You Zoom On A Smart TV? (Explained)

Why Are VR Headsets So Expensive? (Top 10 Reasons)

Why Do You Need An Adapter For A Micro SD Card? (Explained)