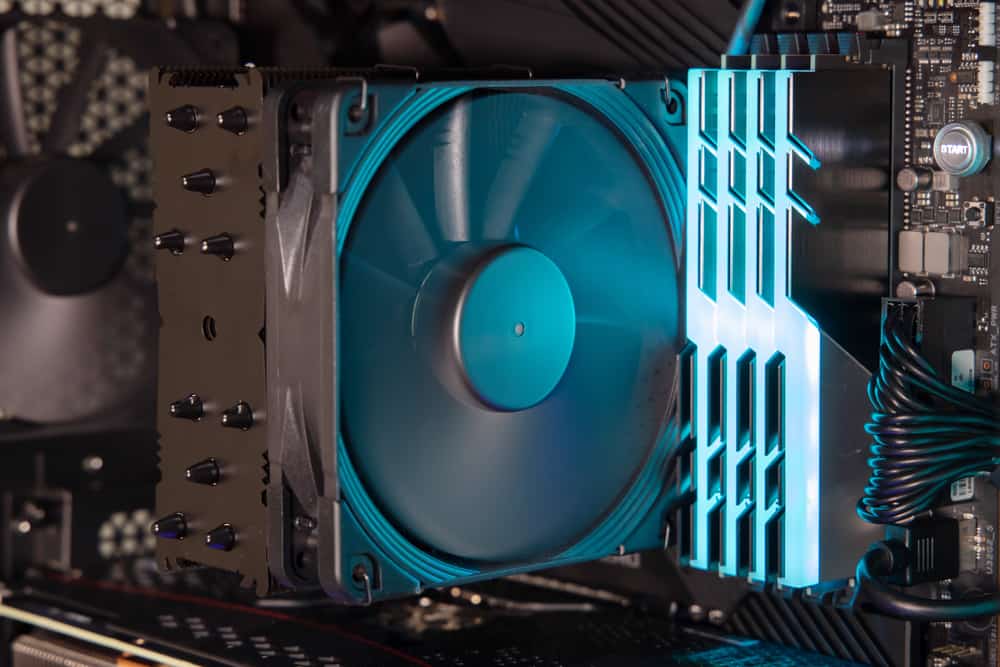 Overheating can wreak havoc on your software and hardware, causing irreversible damage to your computer.

However, it’s easy to go overboard and keep your computer fans spinning at max speed to make sure your CPU remains cool.

Is this recommended, or are there more effective ways?

Should I Run My PC Fans At Full Speed? 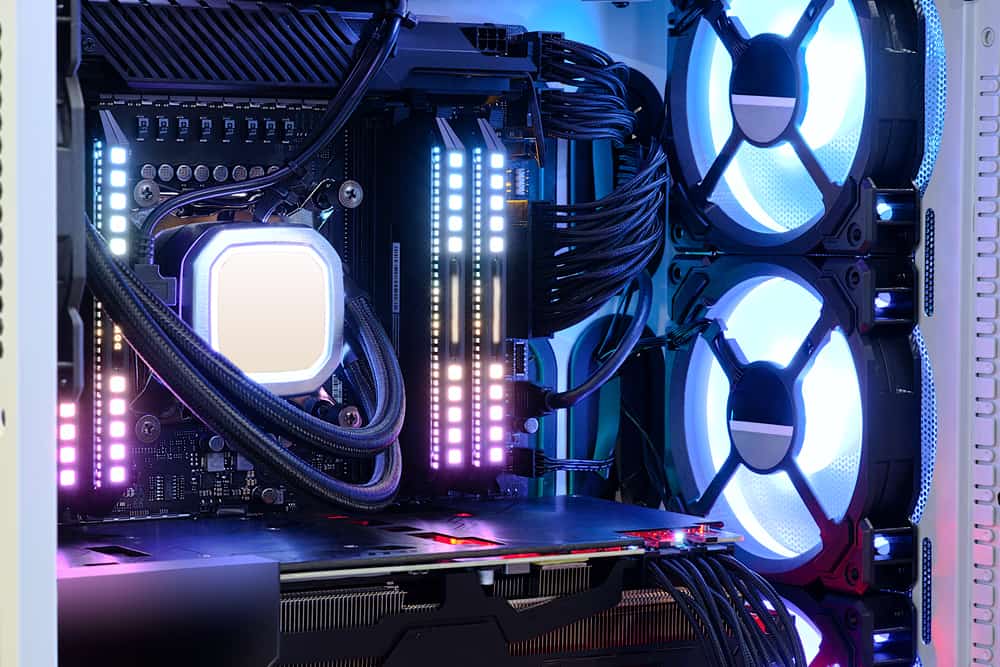 No, you don’t need to run your fans at 100% speed all the time, especially if you don’t perform heavy tasks on your PC.

When your computer is idling or you’re performing light tasks, the temperature inside the case doesn’t go up to the point that needs the fans running at full speed.

Therefore, you can run the fans at lower speeds to cool down the PC effectively.

On the other hand, running the fans at full speed can have some disadvantages that we’ll discuss below.

Why Should You Run Your PC Fans At Full Speed? 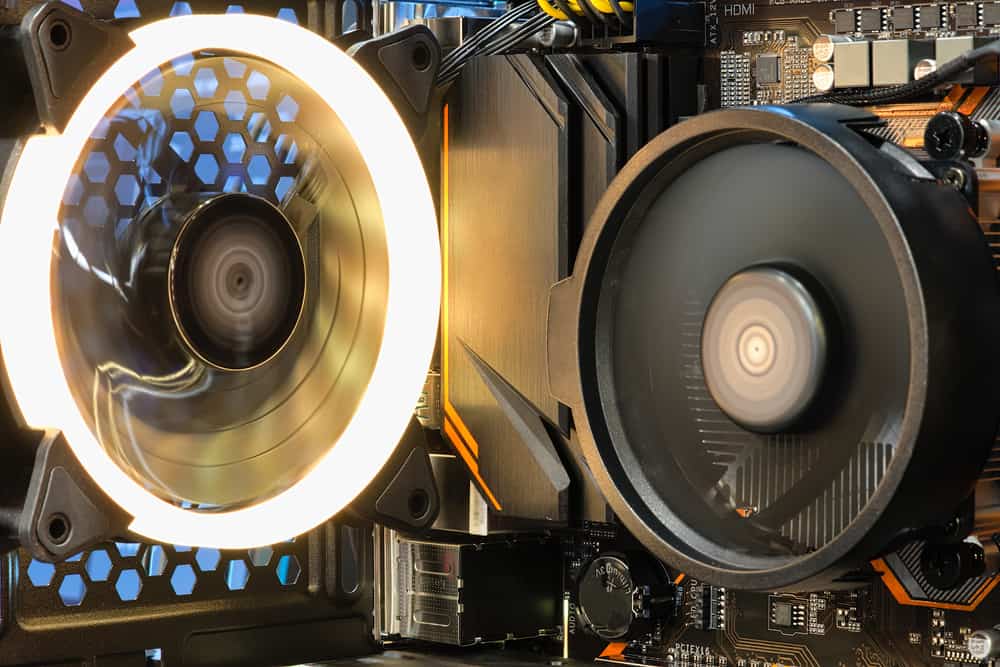 When you ask whether you can run your PC fans at full speed, the first question that comes up is, “Why would you do that?”

Some performance-obsessed users believe they can increase their components’ lifespan by keeping the temperatures as low as possible.

However, the internal components, especially the CPU and GPU, have high thermal tolerances.

The manufacturer specifies the maximum temperature allowed for the component, and their accompanying fans can effectively keep overheating at bay.

As long as you keep them below the allowed threshold, you don’t need to worry about their lifespan.

In addition, PCs have effective thermal throttling mechanisms that reduce the PC’s performance or shut it down to keep high temps from damaging your sensitive hardware.

As a result, you don’t need to go overboard to reduce the temperatures.

On the other hand, you may get a performance boost in your GPU if you reduce its temperatures below the allowed levels.

That’s the main reason many users run their fans at full speed.

However, the ultimate decision is up to you after considering the disadvantages of running the fans at 100% speed. 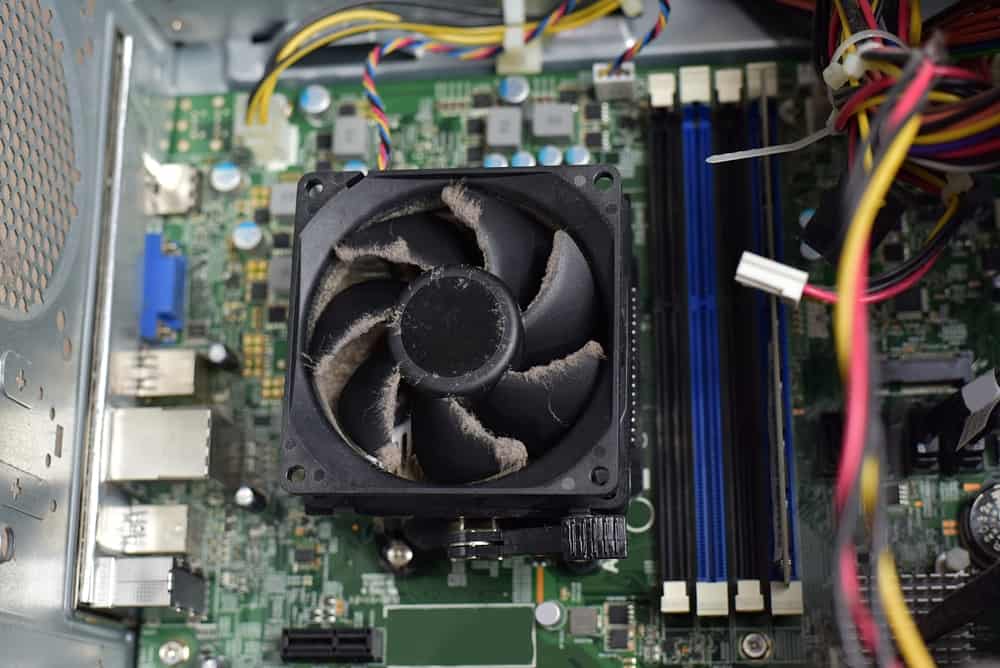 Running your PC fans at max speed can help you keep the heat at bay, increasing your GPU or CPU’s performance and lifespan.

However, it comes at certain costs that make choosing the right option difficult.

The most significant disadvantage of running CP fans at full blast is increased noise.

No matter how silent your fan is, it can get loud when you run it at full speed.

It can be distracting and annoying, especially when you need to concentrate.

That’s an unnecessary cost that you pay when performing light tasks.

You can keep your computer cool at lower fan speeds without getting irritated by the fan noise constantly running.

Although it may not sound like a dealbreaker—given the low cost of aftermarket fans—running the fans at max speed can increase the tear and wear on them.

If the fans rotate at full speed all the time, their bearings will give out sooner than their expected lifespan.

Again, that’s a cost that you should decide whether you want to pay while keeping your PC’s internal parts cool all the time.

If your computer is in a dusty environment, running the fans at max speed all the time may not be recommended.

The main function of PC fans is to exhaust warm air and attract cool air inside the case.

However, they can attract dust from the air, making it a negative byproduct of cooling.

The faster the fans run, the more dust they can soak in.

Increased dust may not be a serious issue if you clean the innards regularly.

However, dust buildup will counter the effect of running the fans at the highest speed if you don’t keep the PC clean.

It can clog the case vents and the fan’s bearings, preventing the fans from rotating properly and trapping heat inside.

Here’s another natural consequence of running fans at max load.

The harder an electronic component works, the more electricity it consumes.

Again, this may not be a significant issue if you want to increase your GPU performance by keeping it cool.

It’s up to you to decide which one you want. 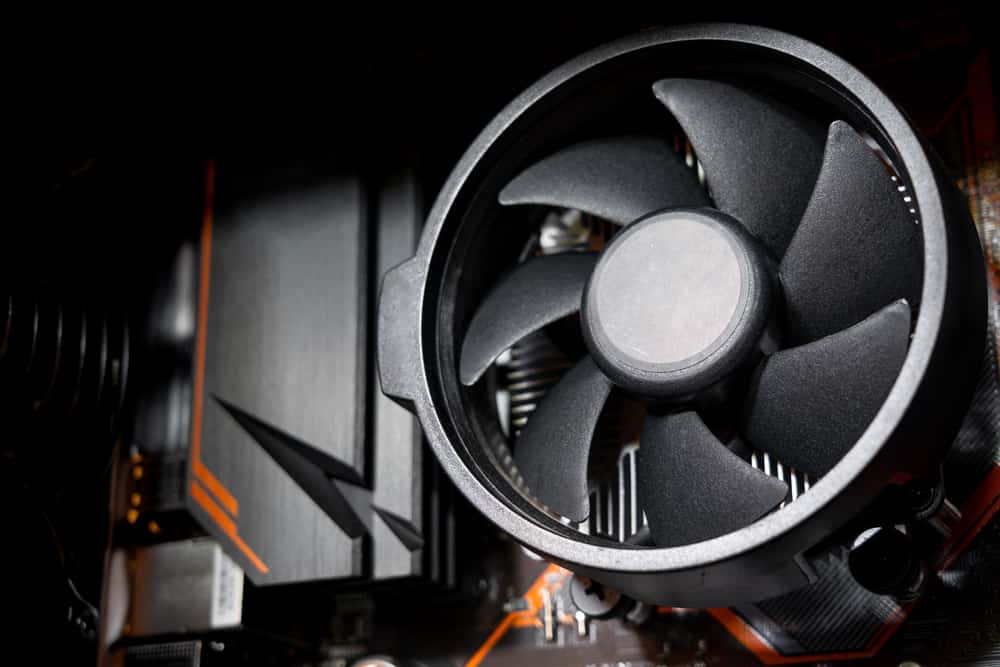 The disadvantages of running your PC fans at 100% load may not be enough for you to lower their speed.

That’s perfectly fine because you can prevent overheating, especially while performing heavy tasks.

However, there are smarter ways to manage your PC temperatures that can effectively cool down the components without taxing your fans.

You can define cooling curves, allowing your fans to adjust their speeds according to the temperatures.

The higher the temps, the faster they rotate.

By defining these curves, you don’t need to hear the fan noise all the time, even while the PC is idling.

Some users believe that changing the fan speed, suddenly stopping, or increasing its load can have more negative effects than running it constantly at full load.

As a result, they prefer to set the curve at a specific speed—not necessarily 100%—and then increase the speed according to the temperature.

While this can be a viable option, it requires checking the temperatures constantly and watching for signs of overheating to manage the fan speed.

That being said, it may be a good option if you don’t perform heavy tasks and are sure the temps don’t exceed a specific value.

How To Control Fan Speed 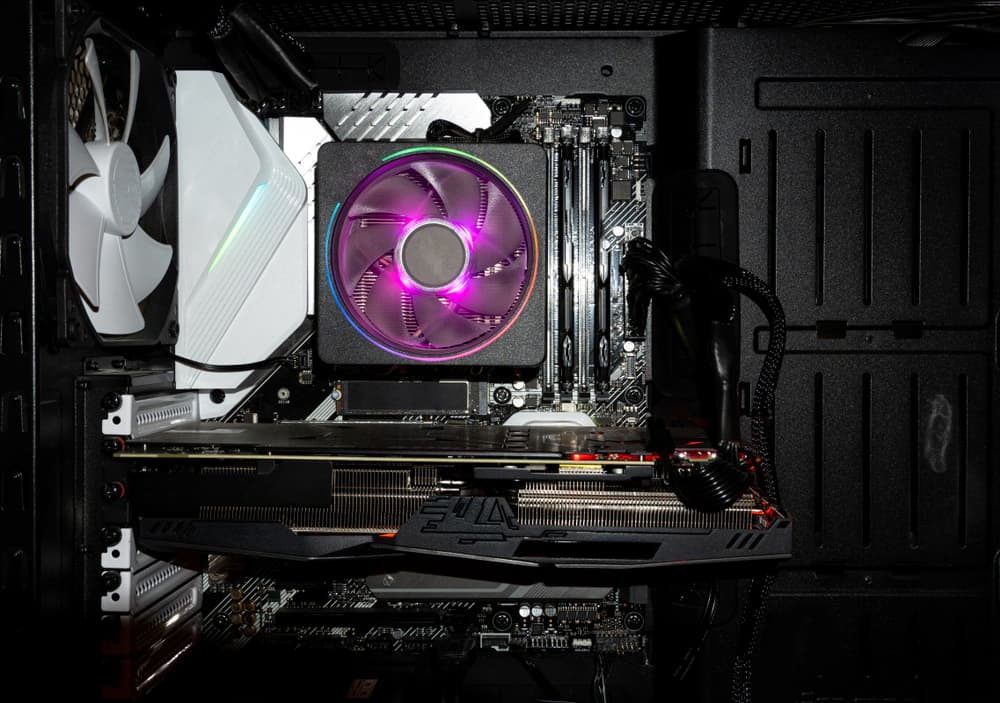 If you decide to define the speed curve, you can use different ways to achieve your perfect settings.

You can set these curves for different fans, including CPU, GPU, and case fans, to get the best performance out of your cooling system.

Here are the available methods:

Most modern motherboard manufacturers allow you to adjust fan speeds through the BIOS/UEFI.

Depending on the model and make, you may get different options.

To control your fan speed through BIOS, you should first enter the BIOS settings.

After the PC boots, you’ll see the BIOS menu.

Once in the BIOS/UEFI menu, find FAN Speed Control by moving the arrow keys and navigating the menus that may be different based on your motherboard manufacturer.

Here, you can see all the fans used on your PC.

Other models, such as Asus motherboards, also have Turbo and Manual.

The Auto mode will adjust the fan speed according to the temperatures.

The manual mode allows you to define curves to give it a more tailored touch.

You can use the Silent mode to run the fans at the lowest speed producing the least amount of noise.

With the Maximum mode, you can select the best speed for each fan depending on its function and the activities you usually perform on your PC.

Some motherboards don’t allow you to define the curve to adjust the RPM based on the temperature.

As a result, your fans will run at a fixed speed no matter what.

This method is the best if you want to keep your fans running at 100%.

However, if you want to set the speed at 60%, for instance, and increase it when the temps go up, you must enter BIOS again and increase the fan speed.

That’s counterintuitive and may even hurt your PC because you should constantly monitor your PC temps and increase fan speeds when they go critically high.

A disadvantage of setting fan speed through BIOS is that the fan has to be connected to the motherboard.

If you have an aftermarket fan that you’ve added to your PC case for more cooling, the BIOS can’t detect it.

In addition, the options in the BIOS may not be varied to give enough choice in adjusting fan speeds.

Plus, older motherboards don’t allow you to adjust fan speeds through BIOS.

The best way to have more precise control over your fan speed is to use specialized third-party software.

Many programs allow you to check your temps under different CPU loads and adjust the fans’ speeds accordingly.

Fan Control, SpeedFan, MSI Afterburner, and smcFanControl are among the best on the market.

Can You Control All Fans’ Speed? 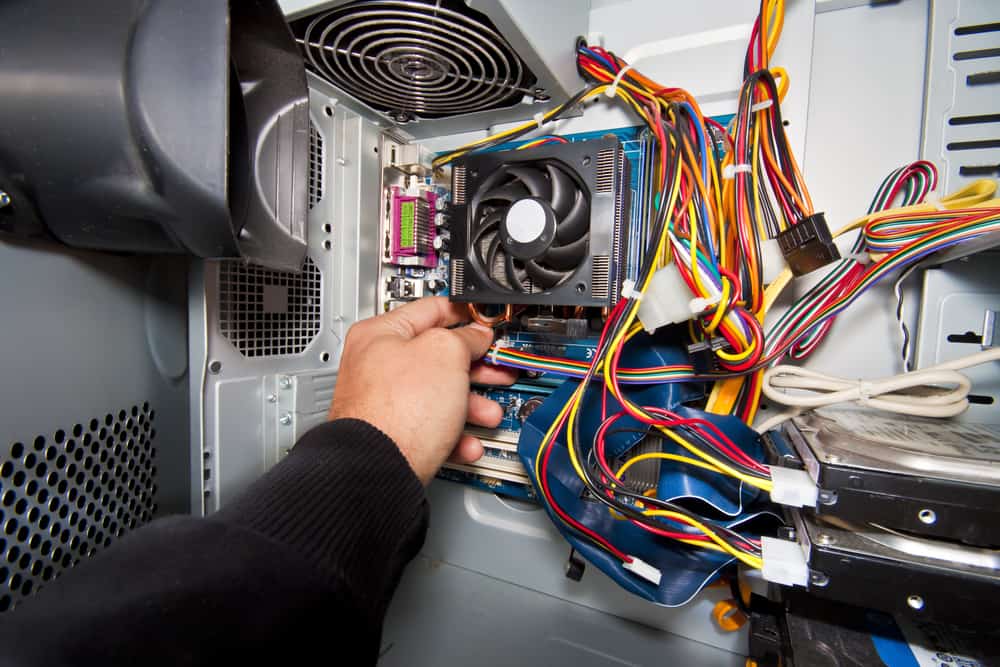 Defining speed curves for your PC fans is an effective way of keeping your PC cool without running the fans at max speed all the time.

However, not all fans give you this option.

Controlling the fan speed depends on its connection and power type.

If the fan is directly connected to the power supply, you can’t control its speed.

Only the fans that get their power directly from the motherboard can be controlled.

That’s because adjusting the fan speed through BIOS involves lowering or raising the voltage given to the fans.

In addition, the fans with 4-pin PWM (pulse width modulation) connectors can be adjusted through software.

On the other hand, fans with 3-pin DC connectors are only adjustable through BIOS. 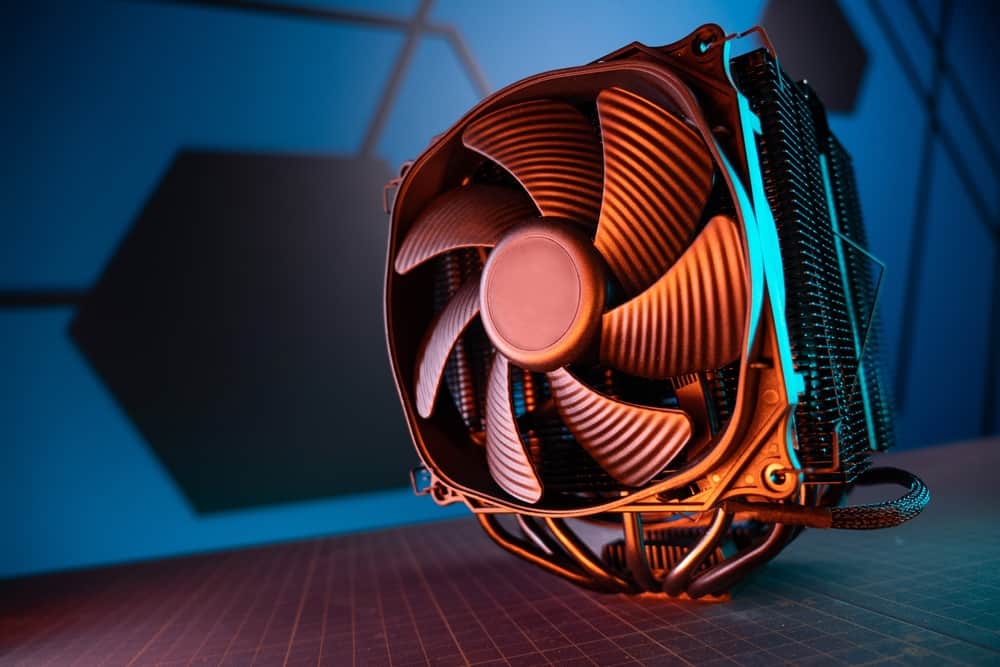 Whether you decide to define a cooling curve through your system BIOS or a software program, you may wonder what’s the best speed for different temperatures.

If you look at the Auto Mode in some BIOS menus, you can see that the speed curve isn’t linear.

The fan speed doesn’t increase steadily as the temps go up.

Instead, the fan speed is the same up to a certain point.

Then it goes up in an ascending line to reach a critical value that revs up the fans to their maximum speed.

That’s an important point because when you perform light tasks like opening files or browsers, the CPU load and temperatures go up and down.

If the fans have to spin fast to cool down those momentary spikes, it gets irritating due to the excessive noise.

The fan speeds also depend on the type of fan.

For example, CPU fans need to run at higher speeds than GPU or case fans because the CPU is more sensitive to high temperatures.

Then, go up steadily until you reach 60˚C or 70˚C to reach the maximum speed.

And run the fans at maximum speed for temps higher than 60˚C and 70˚C.

That said, these speeds depend on your components and their maximum allowed temperatures.

You can experiment with different speeds and monitor the temps until you reach your desired values.